Recently I was supposed to meet up with a new gal in my ladies bike group who also moved here from my hometown of Springfield, MO.  As luck would have it she got stuck in marathon foot traffic in Celebration (seriously and literally) and couldn't make it in time for our scheduled 9:00AM ride.  I was in route and at a stop light when I saw her message.  No problem.  I love riding solo and decided to continue out to the West Orange Trailhead behind the Buddhist Temple to log a few miles.

Sometimes the mind messes with a person.  At first I planned to ride 25 miles, then thought, maybe 10 or 15 miles.  It had been a long time since I had been on my road bike and though I had a good breakfast, a little coffee, was well rested and felt great, I began to sabotage myself.  So I decided to shoot for Chapin Station.  And so began my ride. 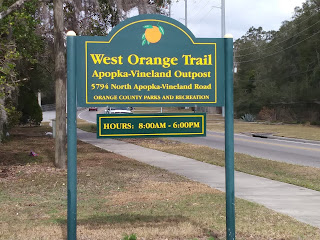 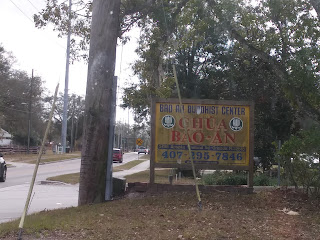 First of all, West Orange Trail is one of my favorite Trails in Central Florida.  One can ride a few miles or a lot of miles.  I planned on taking it slow and easy since I was on my time and didn't have any particular place to go.  Enjoy the scenery, check out a new neighborhood and take some pictures.  If I felt like riding past Chapin Station then I would ride on to Winter Garden.  If I felt like riding past Winter Garden I would ride to Oakland and check out the Watusi at Briley Farm.  Once you make it to Briley Farm, whether or not you get to see the watusi, ostriches, zebras, peacocks and so many other animals, it's a given to head on to Killarney Station.  Here's link to Briley Farm:  http://www.brileyfarm.com/other.html

After deciding to leave the jacket behind I dropped my water bottles into the cages, checked to make sure I had energy chews and a couple of gels, put my ID and funds into my cell phone case and rolled out of the park.  There was a nice breeze, the temperature was perfect, my lungs filled with fresh air, my attitude was stellar and stretching my legs as I pedaled felt fantastic.

The following day my oldest daughter was scheduled to have her labor induced.  My thoughts were charged with anticipation.  She was scared and I was feeling a little anxious wondering how to soothe her.  She was the first person to introduce me to West Orange Trail.  Back in 2003 or 2004, when running was wrecking my knees it was my oldest daughter who brought me back to cycling.  I recalled that first 10 miles.  5 miles out and back.  Going down hill was great!  Not knowing how to shift gears sucked and so did the minor ascents that left me feeling out of breath.

I detoured into a new neighborhood, rolling from one end to the other, then went back to the trail and crossed Ingram Outpost (parking area), deciding to go on to Chapin Station.  Just past Ingram you'll curve along a golf course, a wooded area, a cemetery, down a fairly steep hill (remember - you have to climb back up it but the trip down going fast is exhilarating!).  There's a water station just before the cross walk so you can stop and fill up your water bottle if needed.  You'll pass a school that has cattle and a garden, cross a wooden bridge, climb a slight hill, cross a street and BOOM!  You'll arrive at Chapin Station!

I love the little park there and the sculpture of two kids riding their bikes and a little dog running beside the older girl.  You can park your bike outside the brick footpath, walk back to a little man made pond, sit under the gazebo if you like, listen to water spilling into the pond from one of the egret sculptures and enjoy the foliage.  It's peaceful.  Enlightening.  Path of Light. 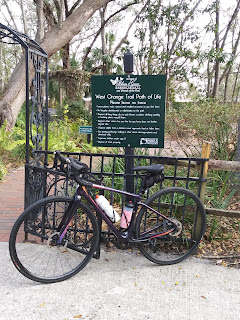 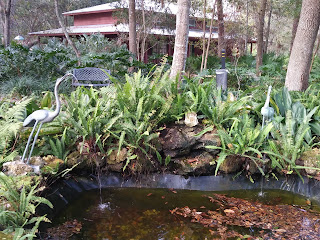 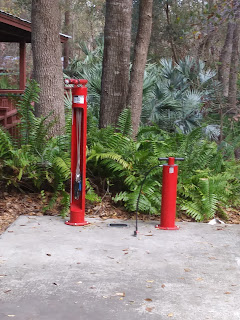 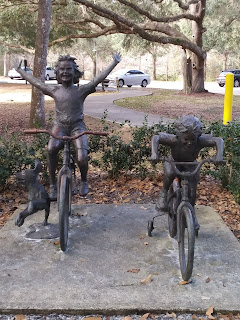 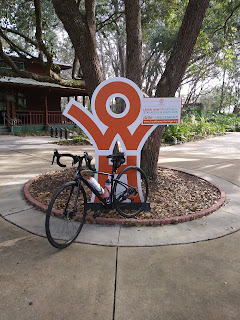 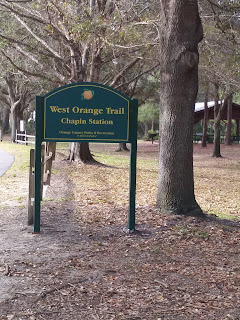 There is also a restroom at Chapin Station, a place to lock your bike in front of the building, I have no idea what's inside the building - I don't believe it has ever been open when I'm there.  It's a nice place to take a break and take pictures though as well as chat with fellow cyclists if you're so inclined.

I walked down the path, snapped some photos, strategically placed Rosie (my ride) for photo opportunities, waved at four cyclists as they pulled up to park and talk, having already decided as I pedaled that my next stop would be Winter Garden.

West Orange Trail is such a pleasant ride.  I couldn't help but smile and as I rode past a little industrial area I flashed back to my daughter and I riding together, darting past chickens that clucked and took over the path, laughing at the fact there were even chickens there!  They're gone now, but the memory of them lives on.

Onward to Winter Garden.  I LOVE Winter Garden!  Down a hill, cross the road with care, up a hill that runs behind another neighborhood, crossing another wood bridge (danger alert on foggy mornings or rain!) and onto Winter Garden Station. Winter Garden Station had signs up that the path was blocked (I presumed from fallen trees thanks to Hurricane Irma) so I rolled cautiously past the signs but no downed trees or danger.  The bike rental shop was open, there's plenty of parking, a beautiful playground, restrooms and water fountains.

Plant Street is the hub of Winter Garden.  The bike path runs down the middle, there are coffee shops, restaurants, an ice cream shop, a bike shop, a theatre and a brewery connected to an artisan market.  Plus piped in music along the path.  Super cool area.  On Saturday they have a farmer's market.  Beware if you're riding through on a Saturday though as you can't ride your bike on the trail or Plant Street due to the tents and customers perusing the wares. 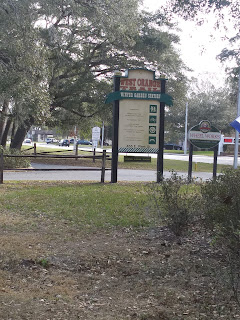 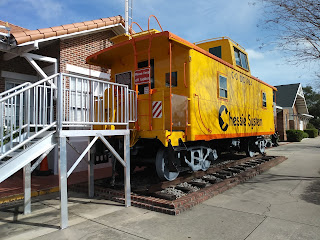 If you want to know more about the bright yellow caboose and the Heritage Museum click this link or stop by and check it out in person!  http://www.wintergardenpost.com/winter-garden-heritage-museum.html

By now it's a given I'm going to continue to Oakland to see the watusi and on to Killarney Station.  Oakland is about 2. 5 miles from Winter Garden and from there another 2.5 miles to Killarney.  Riding along the trail, which now has a new housing development marking the path, I check out the houses, stop to take a photo of the gator carved into a tree stump, look for the gator that used to live in the area, and pedal on to see if the watusi are grazing. 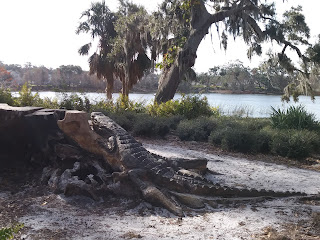 SCORE!  To this day it still blows me away that there is a cool farm that has watusi, ostriches, zebras and peacocks.  I don't care who I'm riding with, if any of the above named animals are out, I will stop and take pictures.  I'll either catch up with the group or enjoy the rest of the ride solo.  On this day there was one lone watusi grazing.  I didn't get very good pictures but if you look closely you can see him. 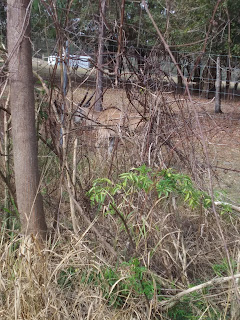 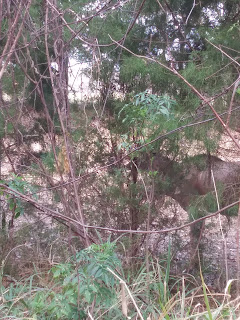 The sight of the watusi had me grinning ear to ear.  I hopped back on my bike, pleased with myself for deciding to ride and snap photos along the way and at my own pace on my own time.  No particular place to go and no particular time that I had to be anywhere.  Bike rides like that are some of the best and most relaxing.

There's a water fountain at Oakland station and a metal bike sculpture.  It's a quiet little park and unlike many other areas of the trail, hasn't been blown up by development.  I snapped a photo of the sculpture and continued to my final destination where I would turn around for the return ride. 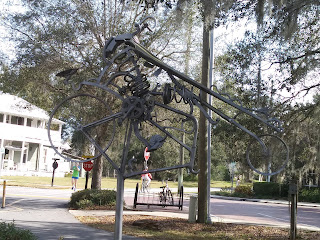 I thought back to the first couple of times I rode this trail, huffing and puffing up the incline that runs along the backside of a neighborhood that leads to crossing the bridge to Killarney Station.  My daughter would stop at the top and cheer me on, other cyclists would ride alongside and encourage me, sometimes I cursed that hill.  I always got to the top, never walked it and rode across that bridge feeling like a kid again and that I had accomplished something.  Thinking about these things make me smile.  :-)

As I rolled into Killarney Station a family of five or six were getting ready to roll out on their rented bikes.  A grandma, mom and three or four teens.  I love when families turn cycling into time together on a bike adventure.  I snapped another photo of Rosie, looked for people I might know, people watched for a few minutes and back in the far stretches of my mind recalled one time riding clipped in and forgot to unclip when I came to a stop.  I fell over into the grass in front of a group of women.  I wasn't hurt but my ego was bruised.  haha! 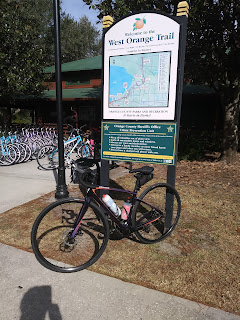 If you're new to the area, or want to take visitors or family on West Orange Trail you have two choices for rentals.  Killarney Station rents bikes and Winter Garden Station also has a bike rental shop which is run by Winter Garden Wheel Works.  Bottled water and nutrition is available inside both buildings and restroom facilities are available on the exterior of both buildings.

There is so much more to share from my return and this blog has gotten a bit lengthy so I'll save the return travel for Part II.  Stay tuned!

'Til next time - Keep Riding!


Posted by coolbikechick at 11:22 AM No comments: